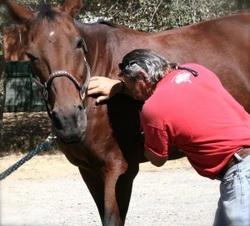 Osteopathic Therapists are renowned for their effectiveness and ability to quickly discover the true underlying causes of physical, emotional, and metabolic dysfunctions.

Osteopathy is a method utilizing hands-on (manual) and natural treatments. It was founded in the late nineteenth century by Doctor Andrew Still, MD as he discovered the interrelationship between the musculoskeletal system and the health of the entire body.

Integrated Equine Therapies utilizes Osteopathy as the core modality and allows practitioners of this method to consistently get results where others have failed.

1. Our hands can and do engage any tissue in the body with precision. While practicing this technique on equines, it is a common occurrence to feel an organ, such as a lobe of the liver or the esophagus, literally flutter back to its intended position releasing tension in the spine, blood, nerves, meridians, and numerous other organs. In our Hands-on Clinics, we spend a lot of time developing this innate skill.

2.  The body is self-healing and has a natural ability for self-correction, repair, and regaining vitality. Chiropractors call it Innate Intelligence; Traditional Chinese Medicine calls it Qi; Homeopathy calls it Vital Force; and Osteopaths are inclined to call it Organizing Intelligence. After an extensive treatment, it is common for a horse to continue to expand the healing.  It’s much like a major freeway intersection traffic jam – after clearing the intersection – the entire freeway clears, making the smaller roads feeding the freeway clear.

3.  The rule of the artery is supreme.  This concept refers to the fact that all the structures in the body require a smooth flow of fluids. The vascular vessels have a neurological supremacy over other structures.  It is literally about “getting to the heart of the matter.” Clearing blood vessel spasms can be a primary technique to use to clear many of the obstructions at once, illuminating deeper patterns of dysfunction.

The work of Frank Lowen, a gifted protégé of John Upledger and Jean-Pierre Barral, had pioneered the technique to unwind vascular spasms.  He understood that it is common for the largest vein in the body (Vena Cava) to be in Spasm. This condition backs up blood flow from the entire digestive and hind end of the horse, resulting in toxic organs, muscles, and joints. By just resting this key obstruction, a large number of symptoms disperse; movement and digestion can be restored.

4.  Structure and function are interdependent. For example, an imbalanced toxic organ will eventually create a lameness. Organs do this by restricting vertebrates, creating nerve impingement, weakening associated muscles and meridians, and cause predictable spinal, pelvic and thoracic alignment issues. This always leads to gait restrictions, weakness, lack of flexion and impulsion, pain related attitude issues and more. The majority of all lameness in horses has a metabolic causation. Therefore, visceral manipulation as pioneered by Jean-Pierre Barral is key to resolving subtle and acute lameness and metabolic issues.

Now that you are signed up, we will send you exclusive offers periodically.